On the island of Keri (Estonia)

Visiting Keri saar in the Gulf of Finland in order to celebrate the Baltic Sea Day on 27 August, 2022.

When starting the virtual Baltic Sea Library in the year 2010 we found a picture of the lighthouse on the island of Keri, taken by a photograpoher Albert Kerstna from Tallinn, and chose it as header for our website.

Twelve years later members of our supporting association Forum Mare Balticum e.V. visited the island of our chosen logo and discovered that even the island of Keri is taken care of by a voluntary association, Keri selts (union). We interviewed Peep Rada, chair person and "keeper" of the island, and publish the interview with his consent.

Listen to this exciting story! 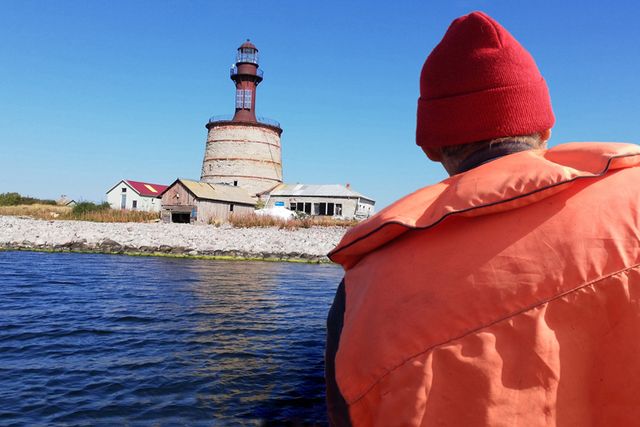 It is now 4 years since we last met in Rostock. At this very moment the Baltic Sea Library hosts more than 100 essays, 500 texts by more than 350 authors. Due to the support from the Neustart Kultur-program by the German government translations to German have had priority during the last two years.

Klaus-Jürgen Liedtke informed about new texts included in the library:

Proposal by Johanna Domokos to open a translingualism subsite along the national literary categories, including such marvelous Baltic authors as Cia Rinne, Sabira Ståhlberg or Øyvind Rimbereid.

Proposal by Johanna Domokos and Sabira Ståhlberg: to hold a conference at ZiF (Center for Interdisciplinary Research), Bielefeld University, in a year ́s time, June 2023, arranged by Forum Mare Balticum and Langueflow (https://langueflow.wordpress.com/)

The Baltic Sea Region is not only an area with dramatic geo-, global and state-political developments, but also a cultural area subject to constant multilingual interference. The aim of this conference is to shed light on the linguistic strategies these literatures manifest from covert/hidden code-switching to overt/manifest modes. The organizers suggest participants investigating the authors and texts included in the online library edited by Klaus-Jürgen Liedtke (http://www.balticsealibrary.info), but analysis of other authors and texts are welcome, too. After peer-review editing of the presentations, suitable studies can be published online at: https://www.balticsealibrary.info/essays.html

We will also investigate the possibilities for a translation fund and for producing a podcast about the Baltic Sea Library.

The political situation had made us feel paralyzed and upset and we feel with Polina Lisvskaya in St. Petersburg.

Some four members of our supporting association Forum Mare Balticum e.V. will travel from Tallinn to Keri Island on 26 August (if weather allows, the boat can only take ten people at once).

The Baltic Sea Library condemns the Russian military’s illegal invasion of Ukraine. Our thoughts are with all the people in Ukraine who are facing war and have to flee their homes.

The Baltic Sea Library strives to foster a common cultural ground for the Baltic Sea region. Our multilingual library recognising and preserving linguistic diversity and translation is directed precisely against a confrontation and totalitarian history view. Our embedded project "Nord Stream 3", explicitly not intended to transport gas like “Nord Stream 2”, but literature into other languages and thus make it accessible in a space that has historically so often been the victim of delusions of power and nationalism. A special focus within this project was therefore on the regions and languages that have been in danger of being torn apart over the centuries. In this new reality, our project feels like the utopia of a peaceful time.

The Baltic Sea Culture Pipeline “Nord Stream 3” has reached its preliminary goal: With more than 60 new translations, primarily essays, the virtual Baltic Sea library has experienced one of its most comprehensive expansions within a year and now includes an impressive number of 350 authors – writers and translators.

The project’s focus was in particular on the border regions and peripheries of the Baltic Sea region: Lapland, Karelia, Ingermanland, Latgale, Kaliningrad. With the selection of the newly added texts, we explore the question of whether a common identity is conceivable in the Baltic Sea region and thus enter into dialogue between our diverse languages via translation. Among others, the following essays have been newly translated into German:

A highlight of the project was a reading on 30 September 2021, the International Translators’ Day. Mareen Bruns, Elna Lindgens and Franziska Zwerg read texts from the Baltic Sea Library in the Museum of Unheard (of) Things in Berlin-Schöneberg – with a live transmission to the street.

On the last few metres of the pipeline, thanks to additional support from the EU's "i-Portunus" mobility fund, we were also able to make recordings of the poem “Baltics” by Literature Nobel Prize winner Tomas Tranströmer and bring it into a new "audios" section. His poem "Baltics" – which is something of an anthem to the Baltic Sea Library – can now be listened to in Danish, Estonian, Finnish, Lithuanian and Sami. It is read either by the translators themselves or by actors.

Our thanks go to the German Translator's Fund, which made the Nord Stream 3 project possible with an amount of almost 60,000 €, within the framework of the Neustart Kultur Programme of the German Federal Government / the Commissioner for Culture and the Media – as well as to all the translators involved.

The Baltic Sea Library is a virtual library with an open-source character. It currently contains representative excerpts from novels and stories, as well as poems and essays, in short: literary texts in 14 languages. In addition to the nine official languages of the Baltic Sea countries, there are also texts in Sami, Norwegian and Icelandic as well as in Latin and Old English. We see ourselves as a model project for the digital mediation of a literary region via translation, since the Baltic Sea region as a communal-dialogical narrative can only be grasped in all its linguistic diversity.

He took them out to the Baltic, through the marvellous labyrinth of islands and waters.

And those who met on board and were carried by the same hull for a few hours, or days, how much did they come to know one another?

How much did they come to know one another?

(From "Baltics" by Tomas Tranströmer, translated by Robin Fulton)

On the last metres of our Nord Stream 3 project, we were able to make one of our most read texts from the Baltic Sea library, the poem cycle "Baltics" (“Östersjöar”) by Tomas Tranströmer sound.

The poem was written in 1974 in a divided Baltic Sea, remembering personal connections from the times before and reviving friendship relations across the borders in spite of all hindrances. It is translated in 12 languages on our platform and some of the translations came about on our request before Tranströmer received the Nobel prize in 2011.

Whilst Tranströmer’s voice was lost in 1990 after a stroke, we undertook a journey this late autumn to give it a a voice through his translators in the Baltic region.

Our platform now features audio recordings of "Baltics" in Danish, Estonian, Finnish, Icelandic, Lithuanian and Sami, which we especially created together with the translators during corresponding trips. Recordings in Latvian and Russian have already been made available before. For Swedish, we are expecting the original recording by Tomas Tranströmer himself from the year 1990, which we will be able to post after New Year.

In addition to the support from the "Neustart Kultur" programme by the German government, the trips for recordings to four countries – Lithuania, Estonia, Sweden and Denmark – were made possible by the EU mobility fund i-Portunus. Our thanks also go to Monica Tranströmer whom we met at her home in Stockholm for the rights to publish the poem digitally.

The European Commission's support for the production of this publication does not constitute an endorsement of the contents, which reflect the views only of the authors, and the Commission cannot be held responsible for any use which may be made of the information contained therein.

Saint Hieronymus is considered the patron saint of translators. He retired to the desert to translate the Bible from Hebrew and Greek into living Latin. The International Translators' Day (German: Hieronymustag) is dedicated to him, on which translators leave their chambers to become publicly visible.

Nord Stream3, a project funded by the the German government's "Neustart Kultur" program, brings together essayistic texts from 1990 to the present from the border regions and peripheries of the Baltic Sea area.

The introduction presents the rebirth of a sea and its hidden linguistic diversity.