The work goes on

Dear friends, our project’s main sponsor, Nordic  Culture  Point, has accepted the interim report about our work and will soon transfer new financial means.  Thus, it is high time to make plans about our future proceedings. The “shelfs” of the library need to be filled with more texts!  That’s why all editors are invited to propose three up to six new texts to be included in the Baltic Sea Library - the sooner the better. But the target line should be October 15. Your ideas are of prime importance not only for the completion of the library but also for planned translation workshops that we are going to organize together with Goethe-Institut in spring 2012 (which texts/which authors could be subject of translation?)

More news: the German translator Jürgen Rennert proposes to include in the Baltic Sea Library also Yiddish texts, namely those of the Jewish authors Ber Halpern (Vilnius) and Mark Rasumny (Riga).  What is your opinion on that?  A question here seems to be how Hebrew script can be digitized (PDF files?).  The German translator Walter Neumann proposes poems by Janis Rainis claiming that his work is one of the greatest enrichments of the Latvian language, the Latvian “Goethe” so to say. But, is there “Balticness” to be found? The Norwegian author and translator Erling Kittelsen has proposed to include Latvian dainas. But also with dainas it might be complicated to relate them to the Baltic Sea.  What do you think?  Let’s discuss these items! Your opinions are welcome.

after a meeting in Potsdam arranged by the German-Russian Forum, I can gladly tell you that we have received an offer to cooperate in all what we need from Russia by Ms Ekaterina Genieva, Director General from the State Libray of Foreign Literature in Moscow.
We should just put up a list about which of our texts that are needed in Russian and we will get the help in research and scanning. So do not hesitate!

I also would like to add some more information about the research done by Olga Kurilo who sent us a blog post recently:

Half a year has passed since the first proposals for texts to be included in the Baltic Sea Library were delivered. Here is a list of the texts and a brief survey of how far we have come.

Anke von Tharau (in Lower German and translation by Herder), 1642

1.    Knut Hamsun,” Landstrykere” (The Wayfarers), novel, 1927 (Chapter where  the main character, August, is telling an adventurous story about
his days as a sailor and a shipwreck in the Baltic)

2.       Dag Solstad, “Ellevte roman, bok atten”. (“Eleventh novel, book eighteen“), novel, 1992, chapter about Vilnius, where the main character, Bjorn Hansen, pays a Lithuanian surgeon 10 000 dollars to define him as paralysed, which he is not, and place him in a wheelchair for the rest of his life

3a       Knut Hamsun, “I Æventyrland” (In Wonderland). Travel letters (three opening pages of the first chapter from St. Petersburg) 1903

3b        Tor Eystein Øverås, “ Til – en litterær reise” (Towards – a Literary Journey), 2005, the eight opening pages, outlining the project of making a baltic journey, and why he wants to make it

Let me begin by saying that the technical difficulties involved in launching the website have proved greater than expected, especially the digitising itself, purchasing the rights to publish these texts if they are still under copyright law and the cooperation with the technicians working in the database, who, it seems, speak a language that is very much their own.

Nevertheless, we have made some progress in the case of Finnish, German and Russian texts and have received news that most of the Norwegian texts are on their way. As far as Swedish literature is concerned, we have received permission to publish Tomas Tranströmers “Baltics” and are working on the commentaries. We are also trying to get hold of the translations into other languages―since this is a text that has actually already been translated into most of our languages (although not into Russian). It is also for this reason that we decided to use a line from this poem to introduce our website. 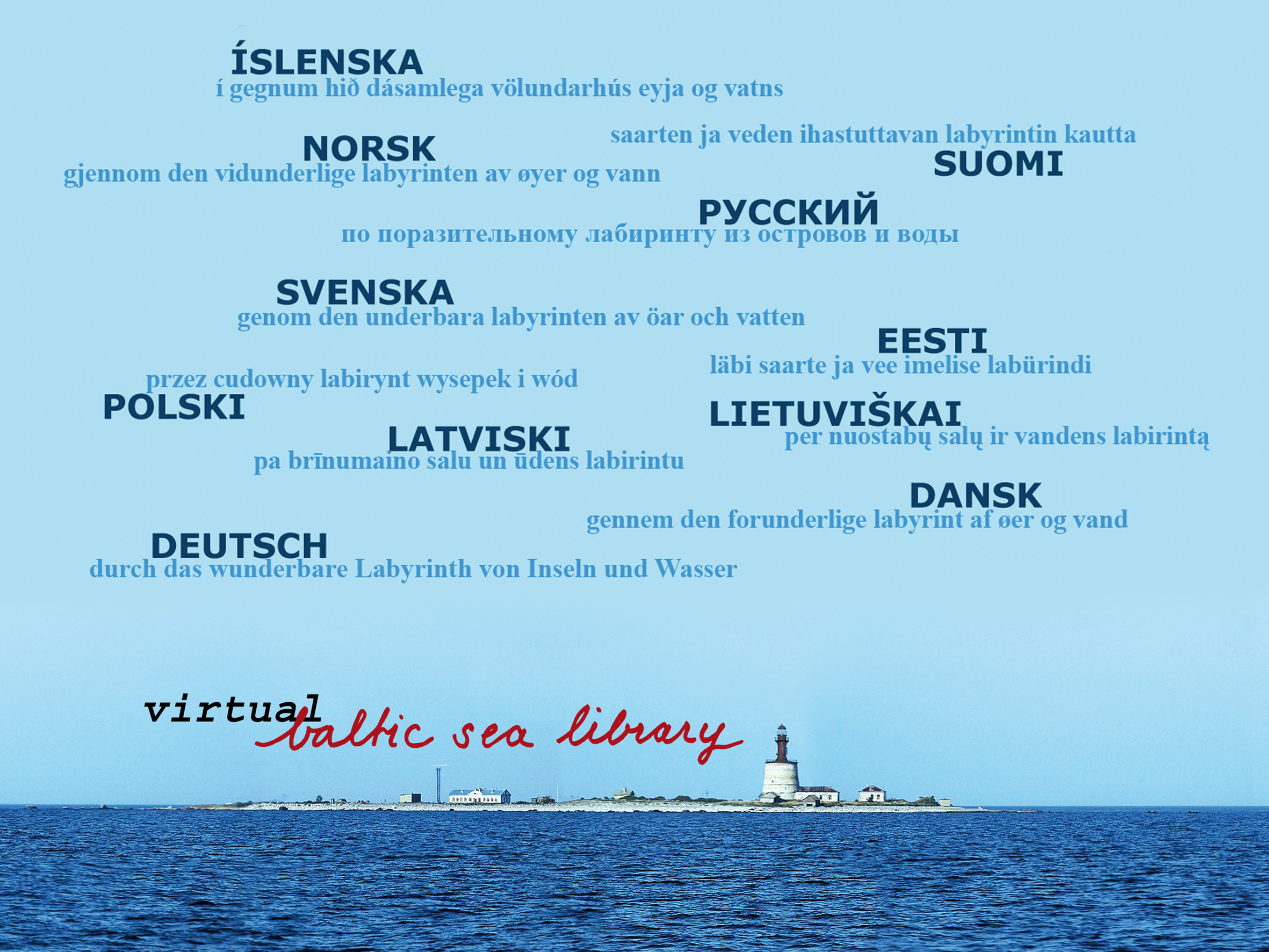 Because Selma Lagerlöf died in 1940, we will not be allowed to publish her “Two towns” before January 1, 2011. In the case of Tove Jansson, we have been denied the right to use her chapter on the website by her estate. The same applies to Thomas Mann’s “Buddenbrooks”, because Fischer Verlag of Frankfurt retains the rights and has denied any online use of the text.

When it comes to Icelandic literature, digitising has been completed but not yet the proof-reading. So a good deal of work remains to be done, as is the case with texts from Danish, Polish, Lithuanian, Latvian and Estonian literature. Financial restrictions mean we do not want to spend the money for this until the end of the year!

Major questions currently facing the project are: how to proceed with new proposals, with research into translations of the chosen texts, and with cooperative ventures with the libraries of the Baltic Sea region.

One very positive aspect resulting from my recent presentation of the project at the Waltic conference in Istanbul was an offer to produce a new translation of an Old Swedish text that has not yet been published: the life story of Agneta Horn, the granddaughter of Axel Oxenstierna, who was painted by David Klöcker: http://en.wikipedia.org/wiki/File:AgnetaHorn.jpg

Meanwhile I have been invited to speak at the Bibliotheca Baltica symposium in Helsinki 21-22 October, both at the conference itself (see the programme: http://bbsymposium2010.nationallibrary.fi/programme/) and at a reception given by the National Library of Finland.

I think this will provide a good opportunity to stress what we have in common and to invite librarians from all around the Baltic to participate in our work, especially with research into translations of the works we have chosen. Gunnar Sahlin, the chairman of Bibliotheca Baltica, has written to me and said that he wants to intensify our cooperation.

I will stay on in Helsinki for the Book Fair and hand out information about our portal, postcards and flyers to the visitors.

Concerning the homepage, we still have to include the essays based on presentations given in Visby in 2002 and that were dropped when we changed address. However, it still needs to be decided whether they should be included in the database. If so, we would need a thorough survey of which locations are included in them.

In the coming year we will be able to offer 12 scholarships for translators of our texts at the International Writers and Translators’ House in Ventspils, Latvia. We still need to decide on the criteria for selection. I look forward to receiving your proposals and comments and your suggestions as to how we should proceed with the project up until the end of this year!

A library for the Baltic Sea

It’s a great idea to gather and translate literature about the Baltic See. This digital library is very interesting not only for the writers, but also for historians, who will use literature sources for their research. I am especially interested in the topic sea side resorts on the Baltic Sea and want to know who of Russian, Scandinavian, German writers was born in sea side resorts or spent there some time and described these places in their work. It would be very beautiful, if we could exchange our information.

A greeting from our friends Monica and Tomas Tranströmer who gives us his permission to include his cycle of poems “Baltics” in the Baltic Sea Library (the first Swedish text proposed by Clas Zilliacus):

As English-language editor for the Baltic Sea Library, it’s my job to knock everyone’s commentaries into shape before they are put online. In some cases this has been easy, partly because a few texts have turned out to be remarkably similar to the Wikipedia articles on the relevant authors/books (!), partly because texts have been relatively well-written. For any misinterpretations on my part when commentators’ English has not been equal to their more complex ideas, I apologize―at least a little bit.

Like translation, editing text means working at the level of the single word, phrase and sentence. It’s easy to miss the big picture when a lot of different texts are involved. Recently I began to realize that I was starting to lose sight of what this project is really about. By this, I mean that I was starting to see the Baltic as a body of water rather than a region. As a result some commentators may have received slightly annoying editorial comments from me urging them to somehow relate their texts to the Baltic as a sea. Of course, this is a very limited view of “Balticness.” As an Australian who grew up on the Great Southern Ocean and the Pacific, the image of the sea implanted in my mind is of a vast barrier separating my country from the rest of the world. Of course, the Baltic is really just a puddle compared to these mighty oceans, but that is what makes it so interesting as a “pool” of interconnections and shared aspects of identity. It seems to me that all contributors to the project could give some more thought to this “shared” aspect―because if this site is to become more than just a repository of interesting individual texts, it needs to offer users a greater sense of why these texts are being compiled together and interlinked. In fact, it has become clear to me in the editing process that the “Balticness” aspect commentators have been asked to comment on really is the key category because what it aims to do is embed texts and authors in a cultural-historical process that the BSL is trying to discern on a regional level. This is what the project, to my mind, is really about. However, so far, despite some extremely detailed and in some cases very lengthy analyses of individual works, this “Balticness” section is the one that commentators have contributed the least to.

Some of the questions that occur to me in this regard: Could Hans Christian Andersen’s fairy tales be related to wider political and cultural developments in Denmark and Scandinavia, the decline of Denmark as a major power, the rise of romantic nationalism and the emphasis on “folk” culture (I’m not a scholar, these are just general ideas)? Could the Icelandic sagas be discussed more in terms of their role as the founding myths of a period of Scandinavian expansionism? And what about the Pushkin and Lermontov as critics of entrenched Russian authoritarianism? Weren’t these authors looking out from Saint Petersburg across the Baltic and drawing ideas from developments in Germany and other countries? What is the resonance of a poet like Akhmatova in Baltic states under Stalin’s fist?

As I said, these are general questions from an outsider, but also a potential, non-scholarly user of the BSL as a resource. I think that a further aspect of the project could involve a series of “bridges” in the form of comparative essays that link texts and authors in the framework of themes of regional relevance. Anyway, apologies for any misleading editorial suggestions. That for now is my two cents/pfennigs/öre/kopeks/groszy worth.