Content
The summer house, where Thomas Mann (1875 - 1955) lived during three summers and wrote parts of his Joseph-novels, was built with the money from the Nobel prize he received in 1929 and survived the war in Lithuanian Nida on the Courish Spit. Here already an artists' colony had gathered painters like Max Pechstein from 1909 onwards. Built in Courish style, the family's summer cottage (they had six children) was superbly positioned among pine trees above the Courish Lagoon. 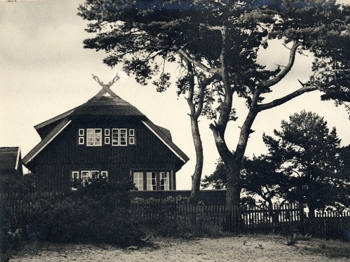 Since May 1995 two institutions are located in the restored Thomas Mann House: the Thomas Mann Museum, financed by the State of Lithuania, and the Thomas Mann Cultural Centre, headed by an international council and funded by various sponsors. The Museum's permanent exposition, opened in 1967, contains a collection of photos, books, and copies of documents reflecting life and works of Thomas Mann, esp. his summers in Nida and his relationship with Lithuania. No authentic items have remained in the Museum. The Centre in Nida organizes educational events for young scientists from Lithuania and abroad, as well as international seminars and scientific conferences, a Thomas Mann festival and music recitals, it is supported not only by its founders (the Lithuanian Ministry of Culture, the University of Klaipeda, the Municipal Administration of Neringa), but also by institutions like Academia Baltica (Lübeck), the cultural association "Borussia" (Olsztyn), Goethe-Institute in Vilnius, Danish Cultural Institute, Embassy of the Federal Republic of Germany in Lithuania, Soros Foundation; Robert-Bosch-Foundation, Stuttgart, Foundation "Lithuanian Books from Lithuania", and others.

Hermann Sudermann (1857 – 1928), German dramatist and novelist, was born in Matzicken, East Prussia and grew up in Memelland (nowadays Klaipedos krastas). He studied at the universities of Königsberg and Berlin, became a teacher and journalist, and published a series of tales, of which Frau Sorge, Der Katzensteg and Es War are the most impressive. His dramas were often performed at the Berlin theatres, and even in Vienna.

The town of Tilsit on the river Nemunas, nowadays Russian and called Sovetsk, was the target for his most famous tale, written in 1917, Die Reise nach Tilsit (The Journey to Tilsit) relates the dramatic story of a fishermen's couple, on their way to the town of Tilsit and back home on the Courish Lagoon, where Ansas, the man, plans to murder his wife, but he drowns in a storm, after he has saved Indre, his wife. The story was filmed several times, both in Germany and Soviet-Lithuania. Also the others of his Litauische Geschichten and especially his Bilderbuch meiner Jugend (1922) contain his memories from his childhood experience in Memelland and from his travels to sea resorts at the Baltic.

Today, a small museum in his birth village of Macikai (Matzicken) near Šilute is dedicated to Hermann Sudermann who is recognized both in German and Lithuanian literature.