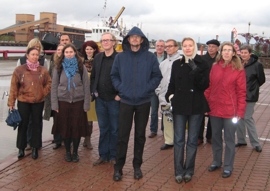 The first day of Editors’ Seminar discussions built on an opening address by convenor Klaus-Jürgen Liedtke, who recapitulated both past efforts and present ambitions relating to a virtual Baltic library. This was followed by two commissioned contributions. Hans Peter Neureuter, professor emeritus (Regensburg, D), outlined the cultural identity of the Baltic Sea area as a literary sphere. Tor Eystein Øverås (Bodø, N), writer, sketched both historical and present-day modes and manners of travel writing practiced in the area, including his own.

The discussion that followed testified to the wealth of potential approaches and structuring principles that can be advocated for and might be challengingly applied to the making of a virtual library centering on the Baltic.

As Klaus-Jürgen Liedtke summed up the discussion: “‘The Baltic Sea of Words’ is to be seen as a whole, as a topic, thus carrying the interculturally connected literatures including echoes of other texts. Starting from today’s separation we see the need of crossing borders in our quest for the Baltic in our minds, the lost neighbours.”

It was further agreed that