What thoughts occurred to Karin Savalo when a company of travellers appeared at the Lapp (Sami) settlement of Tuorpon in the summer of 1868? The strangers unpacked a large camera from birch-bark hampers carried by bearers. A woman asked if she could take some photographs. Karin and her daughter Inga stationed themselves in front of the camera. Why was it so important that she and the girl, after being photographed from the front, should turn sideways? Karin Savalo did not know.
The woman photographer was Lotten von Düben. It is hard to imagine her allowing herself to be photographed in the same way. In her own social circle it was customary for women to be portrayed in full figure, dressed in beautiful gowns. Such photos tended to be flattering as one wanted pictures of oneself to keep at home and to send to friends and acquaintances. 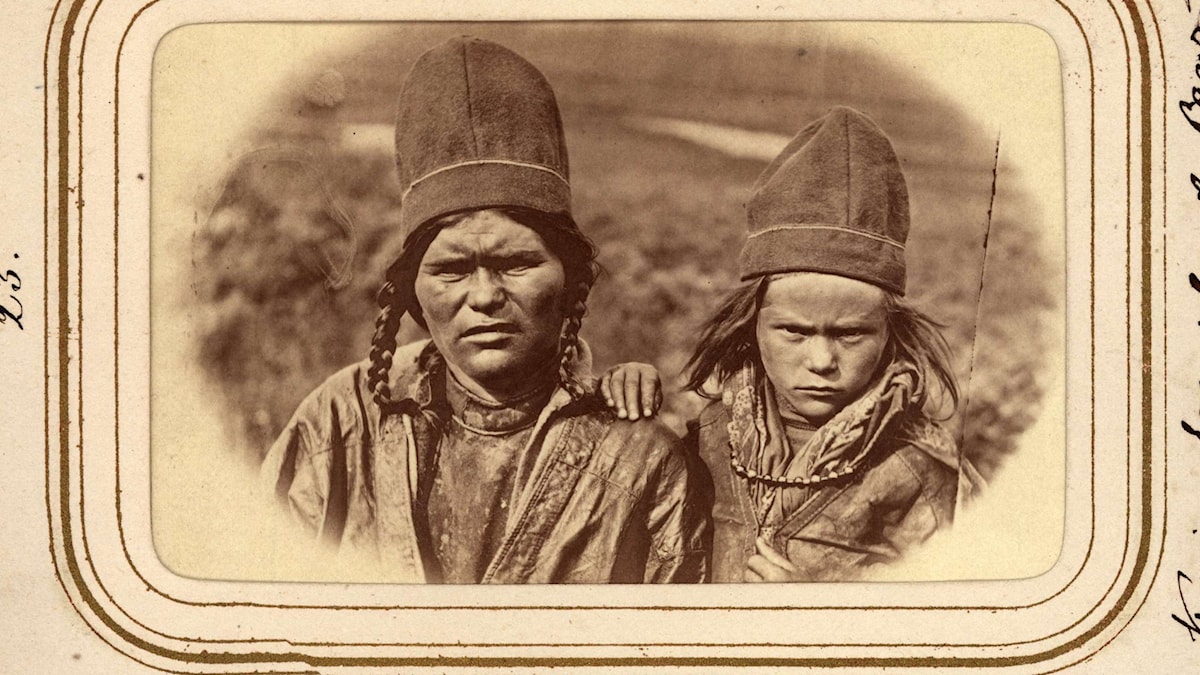 The portrait of Karin Savalo and her daughter Inga is part of a collection of photographs and artefacts to be found at the Nordic Museum in Stockholm. The visit to Tuorpon village took place when Lotten was on an expedition led by her husband, Gustaf von Düben, to study the mountain Lapps in their Lule territories in 1868. The couple undertook a new journey in the summer of 1871, this time to the Lapp territories at Sorsele, Lule and Pite.
By the 1860s, photography had already gained a firm foothold in Sweden. Daguerreotype had already been replaced by the glass negative. This sheet of glass coated with collodion, introduced in Sweden in 1853 by Carl Gustaf Carleman, had revolutionized photography. It was now possible to make an unlimited number of copies from a negative.
Among other things the glass negative along with the technique of producing positive images on paper resulted in an exclusive type of visiting-card. The photographer took six, eight or twelve pictures of his subject. These were developed into contact prints sized 6 x 9 cm and mounted on cardboard. Exchanging such visiting-cards was very much in fashion, especially amongst the bourgeoisie. Special visiting-card albums lay on drawing-room tables with photos of friends and relations.
Photographers also used such visiting-cards to sell views of the city. From 1865 to 1870 there was a positive explosion of visiting-cards in Sweden, and the number of professional photographers increased rapidly. Unlike other crafts, photography was not barred to women. In the 1860s there were already fifteen women photographers registered in Stockholm. And Berta Valerius, Rosalie Sjöman and Carolina von Knorring were among the leading names in their field.
Stereophotos were also very popular. They consist of two linked photographs of the same subject but with a slight shift in perspective. Exotic places and spectacular events such as earthquakes, war scenes and royal funerals were studied through stereoscopes. They gave the giddy impression of a three-dimensional picture.
Who was Lotten von Düben or, to be more correct, Carolina Charlotta Mariana von Düben? Little has been written about her in Sweden's history of photography.
Lotten was of noble birth. She was born in 1828, the third child in a family of six. Her parents were Major Robert yon Bahr and Lady Eva Carolina Åkerhielm av Margretelund. Lotten grew up on the family estate, first at Söderby and later at Margretelund in the province of Uppland. When she was 27 the family began to spend the winters at an apartment in central Stockholm on what is now Vasagatan.
In 1857, she married Baron Gustaf von Düben. He was Doctor of Medicine and Professor of Pathological Anatomy at the Caroline Institute in Stockholm. The couple settled into an apartment on what is now Jakobsgatan. It was rent-free as Gustaf von Düben was secretary of the Swedish Medical Society who owned the building. At that time the family included Gustaf von Düben's mother, a maid and a cook.
In 1860 Gustaf von Düben became Professor of Medicine (anatomy and physiology) at the Caroline Institute and was also appointed superintendent there. He succeeded Anders Retzius, the country's chief innovator in the field of physical anthropology. Retzius had introduced the concept of skull indexing, by which people could be classified as brachycephales (round-heads) and dolichocephales (long-heads). He had also created an anatomical museum that was the pride of the institute. The large collection there consisted principally of Lapp crania. Around this period, craniology had an important place in scientific thinking, something that we find rather difficult to understand today. It brought together the three sciences of anatomy, history and archaeology, and was thought to contain the key to important questions about the common history and geographical distribution of different peoples.
The post of superintendent at the Caroline Institute carried with it free accommodation at a seven-room apartment on Hantverkargatan. The building also housed others who worked or studied at the institute, among them Carl Curman. In the 1880s he was to become one of Sweden's foremost amateur photographers. In 1861 the Caroline Institute needed a studio for medical photography. Carl Curman established one in some of the intern rooms two flights up. Here he taught himself how to work with the wet collodion negatives then available. It was probably here, too, that Lotten von Düben's interest in photography was first aroused. She is said to have learned the art of photography from a relative with a studio.
Gustaf Retzius, the son of Anders Retzius, became apprenticed to Carl Curman. His ambition was to continue his father's craniological studies. He learnt not only the basic techniques of photography but also how to take studio pictures of human skulls: "I was especially interested in the study of Lapp crania, of which my father has managed to assemble a particularly beautiful and representative collection at the anatomical museum in
the Caroline Institute. I began photographing some of them in half their original size and informed von Düben about this. One fine day shortly thereafter he approached me and said: 'I have decided to work on the Lapp crania, so you needn't bother.'" Thus Gustaf von Düben "took over" the study of Lapp skulls. Possibly this line of research belonged to the post he held. Gustaf Retzius, who became a well-known anatomist, was obliged to concentrate instead on craniological research in Finland. In 1878 he published "Finnish Crania".

Expeditions and the exposure of the exotic

It may seem strange that Gustaf and Lotten von Düben made these expeditions to the Lapp territories. But this was the age of the explorer. In the United States, photographers accompanied the expeditions sent to investigate mineral deposits and Indians. In Africa, Stanley took his camera along on his expeditions. Most of those who practised the art of photography came from the upper strata of society. Their pictures of "the natives" were then exhibited in the drawing-rooms of London, Paris and Berlin.
The Swedish scientist Adolf Erik Nordenskiöld took along Louis Palander as navigator and photographer on the expedition to Spitzbergen in 1872—73. Palander, who later led the Vega expedition, also took pictures of the local chukchi who approached the icebound boat. The photos are fine, eloquent character studies.
But why did so many scientists, both from the Nordic area and abroad, direct their gaze towards the Lapps and Lapland in the 1870s? Groups of Lapps travelled round Europe in caravans, exhibiting themselves to the public. At the Hagenbeck Zoo in Hamburg, for example, a Lapp family with reindeer were displayed in 1874 and were followed four years later by a group of ten Lapps from Kautokeino. The Lapps and their remarkable reindeer were tremendously popular but American Indians, Eskimoes, Senegalese and Kalmucks were also put on display.
Exhibitions and shows involving "fringe" peoples were ideal stamping-grounds for anthropologists not wishing to undertake long journeys of their own. They flocked to such events with cameras and measuring instruments. Scientists wrote out "certificates of authenticity" for the touring troupers and in return had their study material delivered on a plate. The most "fortunate" case of all was that of the Indian chief White Fox. He died of tuberculosis in Gothenburg in 1875. His body was transported to the Caroline Institute in Stockholm, where Gustaf von Düben issued invitations for a showing at the morgue! The incident gives some idea of the way minorities were regarded in those days.
It was at this time, too, that most of today's ethnographic museums were founded, as a result of colonialism and to supplement the existing museums that focused on indigenous culture. Hagenbeck gave the ethnographic samples left over from the first Lapp tour to the ethnographic museum in Leipzig. Gustaf von Düben gave or sold most of his extensive Lapp material to Arthur Hazelius's Scandinavian Ethnographic Exhibition (renamed the Nordic Museum in 1880).
However, more and more scientists wanted to visit the areas inhabited by the Lapps. A steady stream of explorers from the whole of Europe flowed northwards. Scandinavians followed in their footsteps. Norwegians J A Friis and Ludwig Daa visited the Russian Lapp territories in 1867. Gustaf von Düben travelled around Lapland in 1868 and 1871. A large Finnish expedition went to the Kola Peninsula in the mid-l880s.
Most of these travellers measured the Lapps for anthropological purposes. They took measurements and casts, collected skulls and carried out "type studies": stereotype photographs en face and in profile. The Lapps were regarded as a link in the biological chain, a left-over from a bygone age, and it was hoped they would provide the answers to important questions.

Lapp pictures and other comparable photographs