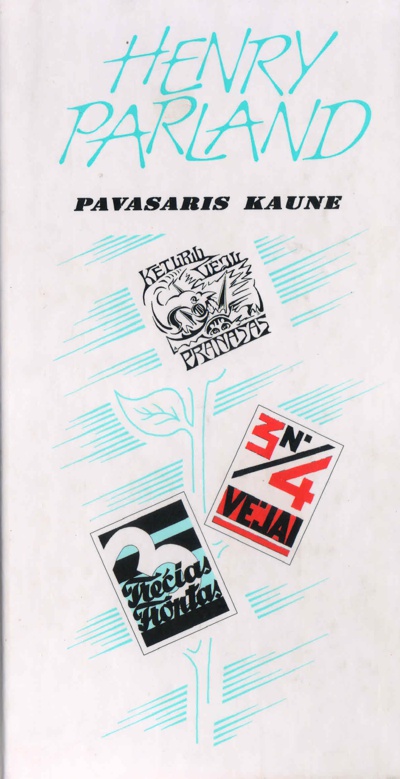 In May of 1929, the Finland-Swedish student of law and recently debuted poet, Henry Parland, was sent by his parents from Helsinki to Kaunas (Kovno), the capital of Lithuania. They wanted to save him from booze, bohemianism, and modernism. It was the final move for the young author, who died a year and a half later of scarlet fever in his exile. He was only 22 years old. He was interred in Kaunas.

The Parland family, domiciled on the Karelian Isthmus, in St. Petersburg, and in Vyborg, and, further back in time, with German-Baltic and English fore-fathers, had settled in Finland after the Russian Revolution. Like many other emigrants, the family had lost their homes and other assets in the revolution. But they had Finnish citizenship.

As a fourteen-year-old, Henry Parland, the eldest of four gifted brothers, began attending a Swedish school in Grankulla (Kauniainen) outside Helsinki. Swedish became his fourth language — after German, Russian, and Finnish — and his literary language.

After he completed his secondary school studies in 1927, there followed two academic years of law study at the University of Helsinki, but even more of “life studies” and preparations for a life of letters. Parland became one of the collaborators in the journal Quosego. Tidskrift för ny generation [Quosego: Journal for New Generation] (1928–1929), together with, among others, the older modernist authors Elmer Diktonius, Hagar Olsson, Gunnar Björling, and Rabbe Enckell.

The goal-oriented Parland had already tried to get a collection of poetry published in the fall of 1927, without success. A year later, he did better, and in the spring of 1929, the through-composed collection Idealrealisation [Ideals Clearance] appeared, one of the most exciting Finland-Swedish poem collections of the 20th century. The book consists of four divisions: “Stains”, “Socks”, “Flu”, and “Grimaces”. The title of the poetry collection and the section headings consist of words that have been plucked from individual poems in the collection. The poems are extremely concentrated, 4–13 lines long. They are light, airy, elliptical, and seemingly sketchy. They communicate by addressing the reader, by exclamation, questions, colloquial language. The I of the poems moves with sovereignty in its poetic world. Parland’s poems are not emotionally cold, but distanced. A very common device is the animation of things. “Rebellion of the things” (“Sakernas uppror”) was the felicitous title of one of Parland’s texts in Quosego.

But Parland’s double-life, with neglected studies, bill-jobbing, alcohol abuse, and messy love affairs, came to light in the end. He was still a minor, and his parents sent him — when Idealrealisation had just arrived from the printer — to his uncle Vilhelm Sesemann (1884–1963), in Lithuania. Sesemann had also left Soviet Russia, a few years after the revolution, and in 1923 had taken a professorship in philosophy at the university in Kaunas. His family, however, lived in Paris.

Henry Parland’s time in Lithuania meant, in part, a new start, just as his parents had hoped. He received employment as a secretary at the Swedish Consulate (half-time), studied French (read Gide and Proust), and wrote articles for Lithuanian and Finland-Swedish newspapers and magazines. He got to know Lithuanian authors and journalists. But his letters also tell a story of loneliness, alienation, and addiction. In the summer of 1929, a few poems were published in Lithuanian translation in the magazine Naujas Žodis [The New Word]. He wrote articles for the Lithuanian press in German, primarily on Finnish and Nordic literature. They were published in the ruling national party magazine, Vairas [The Rudder], the academic Židynis [The Hearth], the revolutionary Trecias Frontas [The Third Front], and in the weekly Naujas Žodis.

For the Finland-Swedish press he reported on the new things he encountered: the Jewish theater studio, Soviet-Russian films (banned in Finland), the grave of the unknown soldier, and so on. He also wrote the first Nordic introduction of Russian formalism in an article entitled “Den modernistiska dikten ur formalistisk synpunkt” [The modernist poem from a formalist perspective] for the fifth issue of Quosego (which never appeared; the article was published posthumously).

Furthermore, he authored a novel, Sönder (om framkallning av Veloxpapper) [Broken (On the Development of Velox Paper)], a modernist experiment inspired by Proust and the Russian formalist notion of automatization–defamiliarization. Sönder is a meta-novel and a love story “that is not about love” (as Viktor Shklovsky would put it).

Parland also wrote new poems, including some that take conditions in Lithuania as their point of departure, and which are presented here in English translation. They differ slightly from the poems from the Helsinki period by being less light, playful, and ironic, although these aspects have not completely disappeared. The poems on the Jewish theater and on the grave of the unknown soldier are from his first time in Kaunas, the third poem is from the spring of 1930. It is difficult to be certain what the target is of the description of how various people and various nationalities gather in front of the monument: nationalism, those who take off their hats, the trembling voice of the poem? The poem is a faithful description of the international, cosmopolitan environment in which Parland found himself his whole life, though in ways that varied.

Towards the end of 1930, shortly before Parland was to take up a new post at Ivar Kreuger’s match company which was seeking to establish itself in Lithuania, he was struck by scarlet fever and passed away on November 10.

Henry Parland’s work has largely been published posthumously. It has also been translated into a number of languages (French, German, Russian, English, Finnish, Lithuanian). Here, two editions are particularly noteworthy: Zerbrochen (Über das Entwickeln von Veloxpapier), 2007, which also ran as a serial in the Frankfurter Allgemeine Zeitung in September-October of the same year, and Ideals Clearance, 2007, in translation by Johannes Göransson with the original Swedish in parallel.

In 2008, Henry Parland’s centennial was celebrated with, among other things, a well-attended international symposium on Hanasaari outside Helsinki.

Henry Parland, Déconstructions, transl. Elena Balzamo, Paris: Belfond 2006 (with the novel came a booklet with Idealrealisation in its entirety, under the title Grimaces: Poèmes).