Content
Thomas Mann (1875 - 1955) published Buddenbrooks in 1901, his first novel about the “decline of a family” through four generations from 1835 onwards, and in 1929 he received the Nobel prize. It seems an irony of fate that the incompetence for life depicted in the lives of the Lübeck patricians rendered world fame to their descendant, in the same sense as Thomas Mann talked of an intensification of life through spirit. The family's home for some years, the Buddenbrookhaus, built in 1758, since 1993 hosts the Thomas- and Heinrich-Mann-Centre inside the Old Town of Lübeck, a UNESCO world heritage since 1987. It has been formed into a municipal literary foundation and turned into a research centre and a museum for Thomas Mann and his brother Heinrich (1871 - 1950), the author of the novel Der Untertan (1905), both born in Lübeck, where they also went to school, at the Katharineum at Königsstraße. 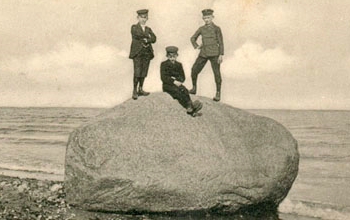 In Thomas Mann's Buddenbrooks the musicality, the intensity of his childhood memories derives from the sea impressions, as a mirror of the soul, a projection area. The sea resort of Travemünde outside of Lübeck is the stage for Tony Buddenbrook's first love, a love that transcends the social borders, as the object for her love is a young fisher boy and student, Morten Schwarzkopf, living in Travemünde in a pilot's house at the Vorderreihe where there were simpler lodging houses for summer guests (Travemünde was a sea resort since 1802). Up on the Brodtener Steilufer the couple finds its very private place, a round sea pavilion built from rough trunks and planks where other couples already had engraved their names. The climax of their short romance is reached when they on their last evening after the end of the season sit on the ”Möwenstein“ (Sea-gull stone) staring at the green waves in a sentiment of timelessness. Thomas Mann himself returned to his childhood places after his American exile in 1953, two years before he died in Zurich .